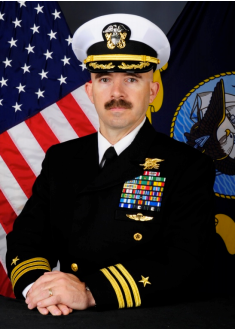 On Thursday, March 13 at 2:30 pm join Commander Philip Kapusta for “North Korea: The New Heart of Darkness,” a discussion about one of the world’s most notorious leaders, Kim Jung-Un of North Korea. Kapusta, a former Navy SEAL and current strategic planner for the U.S. Special Operations Command in Tampa, will explore Kim Jung-Un’s saber-rattling tactics against the United States, the assassination of his uncle, and other ways in which this world leader continues to make headlines.

Kapusta’s naval career took him from his hometown in northern Virginia all the way to Ghazni, Afghanistan, and back. His latest post, as a strategic planner for the U.S. Special Operations Command in Tampa, means Kapusta’s expertise includes a breadth of military assignments. Kapusta graduated from the U.S. Naval Academy with merit in 1992 and then served at SEAL Teams 2 and 8 during the 1990s, including as officer-in-charge of a SEAL platoon and Assistant Operations Officer. He earned a MS degree from the Naval Postgraduate School in Leadership and Human Resource Development; attended the Command and General Staff College and the School of Advanced Military Studies; and later earned an Executive MBA from Benedictine College. After graduating from the School of Advanced Military Studies, Kapusta served as Chief of Strategic Plans at Special Operations Command Central as part of the Joint Planning Group and in 2009, was selected for command of the Provincial Reconstruction Team in Ghazni, Afghanistan where he served in 2009-2010. Kapusta and his wife, Michelle, live in the Tampa area with their three sons.

The talk, part of the Lifelong Learning Academy’s “Lecture Series,” is Thursday, March 13, 2:30 p.m., in Selby Auditorium at the University of South Florida,Sarasota-Manatee, 8350 N. Tamiami Trail, Sarasota. General admission is $10 per person; LLA members are admitted free. To register, visit www.lla-sm.org or call 941-359-4256.