Daughter of Louis Armstrong to Discuss Life, Her Book in Lecture at USF Sarasota-Manatee

Daughter of Louis Armstrong to Discuss Life, Her Book in Lecture at USF Sarasota-Manatee 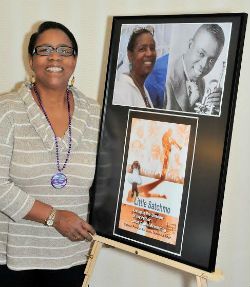 The next part of Lifelong Learning Academy’s “Lecture Series” will feature the only child of Louis “Satchmo” Armstrong, Sharon Preston-Folta, and will take place on Thursday, March 24 at the Selby Auditorium at USF’s Sarasota-Manatee.

As the author of “Little Satchmo: Living in the Shadow of My Father, Louis Daniel Armstrong,” Preston-Folla will talk about her life as Armstong’s secret daughter until 2012, when she released her book and revealed all.

Preston-Folla was born by Armstrong and his extramarital lover Lucille Preston, who were in an affair for decades. Born out of wedlock, her biological link to Armstrong was hidden for decades for the stated purpose of preserving her father’s reputation. She brought the revelation to light in 2012, as she felt could no longer hide her family history.